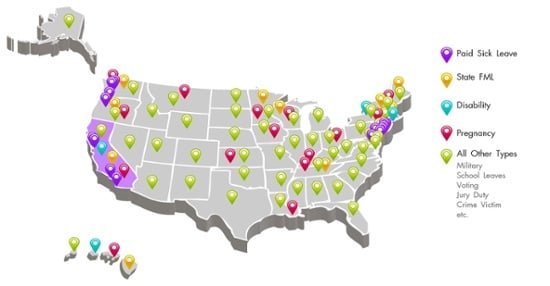 So, you finally thought you knew all the paid sick leave laws?

It’s inevitable — you reviewed last year’s new laws, figured out which ones you need to understand and finally thought you had them under control. But it’s a new year and that means new laws! Two new laws so far, to be precise: Tacoma, WA and Philadelphia, PA.

So what do you need to know right away? We've laid out a summary of each law:

On Jan. 27, Tacoma became the first city to pass a paid sick leave law after President Obama called on cities and states to do so during his State of the Union address.

Tacoma’s ordinance applies to all employees who have worked more than 80 hours in the city within a calendar year, including temporary and part-time employees, as well as unionized workers subject to collective bargaining agreements.

Starting on Feb. 1, 2016, employees can begin accruing one hour of paid sick leave for every 40 worked in Tacoma, up to a total of 24 hours. Employees can then use this accrued time starting on the 180th calendar day after the start of employment. But here’s the tricky part — while employees are only entitled to use 24 hours of paid sick time in the first year of employment, they can use up to 40 hours in their second year, using any unused time carried over from the previous year (employees may carry over up to 24 hours). As if paid sick leave laws weren't confusing enough already!

Accrued sick time may be used for any of the following situations concerning the employee or a family member:

Philadelphia-based businesses are probably already aware of this bill, which was vetoed twice by Mayor Michael Nutter ( in 2011 and 2013). Why the change of heart? Nutter cited the city’s economic recovery following the recession as the reason for his previous stance, but the bill also had enough support from City Council to override his veto this time around.

The bill applies to all companies with 10 or more employees, with the following exceptions:

Employees can use paid sick time for themselves or for a family member, for:

Although unused paid sick time carries over to the following year, employees cannot use more than 40 hours per calendar year unless their employer sets a higher limit.

While two more cities with paid sick leave may not affect the majority of employers, don’t get too comfortable yet -- more and more states are currently considering bills, including Maryland, New Hampshire, Oregon, Vermont and Washington. It’s important to keep your eyes open as this issue continues to develop.